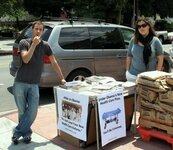 How to Grow Society ?
Creative Common by SA License

First, those who own the money have created a monetary brothel. We do not know what exactly can be bought with the money. We must therefore do a monetary cleaning. What’s important is that your parents own as money. So you have to keep that money.

Money is in the banks. Banks that store money from your parents are called deposit banks. Banks that store money from finance, those who own the money, are called financial banks. But these two banks are mixed. We realized that by cutting banks in half, to separate your parents’ deposits from finance, finance was flowing. Indeed finance uses money deposits for it.

So we can create a public currency. The public currency will be used by country helping industry and agriculture, which produces so. Indeed, finance did not care about that because it had enough for it. So we help agriculture to the maximum with the creation of channels and energy, to realize the channels. Also we help the industries’ trade, thanks to the trains. As that the country grows. Industries, namely industry and agriculture, support the rest of the country. The country is growing. We can live a long time in the country. The life’s quality is improving.

Inquire about the Glass-Steagall, which helps to clean the banks.

Here is the EBook. Here and here are sources.

Also in this section

Do I Have the Right Toys?
Which Job to Choose ?
Why Do Prices Grow ?
How Are We Here ?
Who Permitted That ?